To provide comprehensive support services to children, teens and their families who are grieving a death.

At our core, Annie’s Hope serves humanity in a non-judgmental atmosphere filled with compassion and gratitude.

To be the “first choice” bereavement center focused solely on the needs of grieving children, adolescents and their families in the St. Louis region.  To lead transformational change in the way our region views, acknowledges, and responds to grief, death, and dying.

Check out our Annie’s Hope Video!

Research suggests that nearly 1 in 6 kids will grieve the death of at least one significant person – parent, sibling, relative, classmate, teacher, or friend – by the age of 18. As we delve deeper into the prevalence of childhood bereavement, the Childhood Bereavement Estimation Model (www.judishouse.org/cbem) estimates that 1 out 14 children in the United States will experience the death of a parent or sibling before they reach the age of 18, accounting for nearly 5 million bereaved youth at any given time. The reality for Missouri youth is much darker: approximately 1 in 12 MO children will experience the death of a parent or sibling by age 18, accounting for over 112,000 kids, or 8.4% of MO youth. This number more than doubles when considering young adults who are sibling or parentally bereaved by age 25. The numbers are astounding.

Columbia University conducted a study which indicated that children who do not have the opportunity to mourn the death of a parent could suffer negative effects such as depression, behavior problems, poor school performance, and low self-esteem. Further research found that children who experienced the death of a sibling had higher levels of behavior problems and significantly lower social competence in comparison to unaffected youth. Childhood trauma that is not addressed can be carried into adulthood and can be manifested in a variety of destructive ways including drug/alcohol problems, relationship failures, and psychiatric disorders. Without a doubt, the St. Louis community can and does benefit from an organization that gives the needs of grieving children, adolescents, and their families top priority. 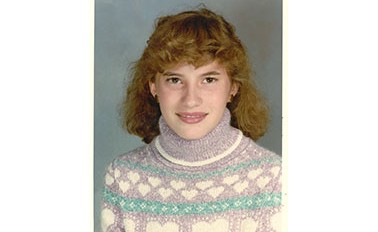 Annie’s Hope is a legacy to a former patient of Becky Byrne (Founder & Executive Director), during her tenure as a pediatric oncology nurse.  Annie was a young lady who never lost hope for her future.

Even though she was diagnosed with Acute Myelocystic Leukemia at the age of twelve, relapsed a few months later, experienced major complications including a bone marrow transplant, persistent fungal infections, kidney failure, dialysis, a kidney transplant, and liver failure, she never let it shatter her efforts to make her life fulfilling, fun and worth every moment. As her mother, Eileen, says, “She was a girl going off to war.”  Annie lived as if she had a war to fight, yet, when it was over she would continue her life as she had planned. She viewed her disease and all its hardships as only a detour to a long and healthy life ahead. She found good in every day. She was thankful for each new morning. She never gave up. In December of 1991, when Annie was living the life she had planned, a sudden intense infection took her life. Her family, mom, dad, sister and two brothers, were devastated. As they explored how they would survive her death, they focused on Annie’s will to live. They would hold hope for a better tomorrow just like she did. They would “fight the war” and one day find a new life that had adjusted to her death. Through hard work, they are now able to remember her courage, her strength and her ability to inspire without gut-wrenching sadness.

Helping grieving families discover their own courage, strength and hope for the future is what Annie’s Hope is all about. It is a safe, warm place where grieving children, teens and their families can find comfort and support throughout their grief journey.

Annie’s Hope – The Center for Grieving Kids had been the dream of the founder, Becky Byrne, since the 1980’s.

The non-profit organization, formerly The St. Louis Bereavement Center for Young People, was formed December 18, 1997 with federally recognized, tax exempt status awarded March 19, 1998.  The founding board members were Melissa McCartie, Ken Abendschein and Becky Byrne.  The logo concept was a gift from Ken Abendschein but was perfected by a Graphic Designer, Steve Slais, for the St. Louis Bereavement Center for Young People, and later by Jen Hahn of Paper Lime for the name change to Annie’s Hope. When celebrating our 20th birthday in 2018, the Zeis Group refreshed our logo.  The logo’s design inspired a variety of images including the representation of the flower as an individual losing a part of themselves to a school losing a faculty member.  The fallen petal has been seen as cradled in the love and care of others, to cradled in the support and compassion Annie’s Hope offers.

Services began with family support groups in the early spring of 1998 and have developed into 10 different programs.  The major event that took place in 1999 was the establishment of Camp Courage.  The first year, the camp was a weekend experience for 56 kids.  Since 2000, the camp has been a 4-night/5-day experience and has a total attendance of about 160 campers.  In 2009, Camp Courage was separated into Camp Courage and Camp Erin – St. Louis.  In 2019, Camp Erin – St. Louis was renamed Camp Courage – Teens and a new logo was designed. In the first year of Annie’s Hope’s existence, approximately 50 families were supported in a program or service while in 2014 that number increased to over 3,000 children, teen and adults with over 7,000 contacts between them.  In addition to expansion in programs, Annie’s Hope has had much growth in staff since 1998.  October 2001 was a monumental month for the first employee, a part time Operations Manager, Kay Walsh, was hired.  And, 2003 started off in an exciting way as Joel Michael, an Annie’s Hope mission family member, created and brought our first web site to life.  In 2004, our first part-time Development Director and part-time Grants Manager were hired and Annie’s Hope made a move to our current location in Glendale.  As programs and resources grew, we hired a FT Horizons Coordinator, a FT Horizons Assistant, a FT School Support & Education Coordinator, a FT Program Director, a FT Program Coordinator, a FT Program Manager, a FT Operations Manager and transitioned from a PT Grants Manager to a PT Relationship Manager.  In 2014, we were most grateful to have our first endowment fund.  To recognize the 10 year anniversary of his wife’s death, Ken Mersmann, his current wife, and his three children started the Annie Carter Mersmann Memorial Fund to protect the future of our programs. In 2018, we celebrated 20 years of serving grieving kids and their families.

Annie’s Hope’s approach is very family-centered due to the fact that children and teens do not exist outside their family.  “Family” constitutes all those persons who support and care for the grieving child.  There is no cost to the grieving families for involvement.  There is no affiliation with a religious group, health care system or any other entity.  Existing for all grieving families who seek our support, regardless of race, ethnicity, weight, sexual orientation, gender identity, physical challenge, spiritual beliefs, and financial situation, is fundamental to our mission.

What is your mission?

To provide comprehensive support services to children, teens and their families who are grieving the death of someone significant.

Who do you serve?

Kids ages 3-18 and their families in the greater St. Louis region.

Is there a cost for your services?

Annie’s Hope does not charge a fee for families to participate in our programs. We are supported solely through donations, sponsorships, fundraising events, third party events, and grants. Families served through the programs of Annie’s Hope are strongly encouraged to make a donation to the best of their ability.

Where are you located?

What programs do you offer?

What happens in support groups?

Each age group has different needs, but in general, communication is opened up through artwork, games, music, puppets, writings, and talk. Here are some examples of the issues addressed and the activities that are utilized to create a safe, comfortable place to communicate. Each individual determines his/her own level of p- Teensarticipation.

How can I help Annie’s Hope serve grieving kids?

Financially: Because our services are free, we exist solely through the generosity of people who recognize that kids’ grief matters. Ways you can help include, personal donations, connecting us to individuals or businesses who may have an interest in ensuring grieving kids get support, and helping with our annual fundraisers. Also, in-kind gifts and services are greatly appreciated.

Volunteer: Get involved and give some of your time in fundraising, office support, program facilitation, Board of Directors, Young Professionals Board and more (See the volunteer application for more details). You’ll never regret it! No matter what your time and talents, we have a place for you.

Ambassador: Let others know about Annie’s Hope and send families our way.